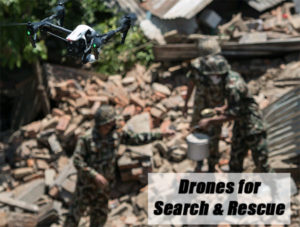 The large use of drones in the Texas flooded areas from Hurricane Harvey, especially for surveying the extent of the damage and looking for people to rescue is unprecedented.  One day drones could enhance the speed of finding stranded citizens & other emergency medical care in natural disasters.

Aerial Visual Technologies is also dispatching a fleet of 5 drones and operators. They’re most used to map construction projects, but this company will use the drones this time to aid in searches and for insurance claim adjustments. Some of the drones are equipped with high end thermal imagining cameras.

“I spent 8 years in the Coast Guard, so I know what it’s like when disasters strike: Chaos. We can bring some organization and a helping hand to that chaos,” owner Robert Nicholson said.

“We can use the drones to pretty much take care of everything that humans can do, so we don’t need to put them at risk.”

The use of drones in the health sector has been gaining popularity in recent times with technology companies collaborating with health care providers to ensure the effectiveness and smooth running of the idea. This could drastically help respond to national disasters like floods, earthquakes, and tidal waves.

The use of drones for carrying lightweight medical kits of up to 20 pounds is now popular with schools being at the forefront of financing the project. With several successful demonstrations and the increasing need to get medical supplies to persons in emergencies, the use of medical drones seems to be the new big deal in the healthcare sector.

The revolutionary idea has also shot into prominence as countries like Nepal, India and other countries in need of medical supplies are partnering drone manufacturers to ensure that such supplies get to remote health facilities as quick as possible.

While there are federal restrictions on the use of civilian drones, the Federal Aviation Administration has granted exemptions in the case of medical drones. However, there are still questions as regards the legality of the drones flying far beyond line-of-sight. There are also concerns about the airways not becoming dangerously congested. These are some of the concerns and questions raised as regards the use of drones for delivering medical supplies.

With the flooding in Texas and Louisiana recently it would have been nice if the National Guard could have deployed an army of drones to deliver necessary medical supplies quickly to areas in need.

When will the United States military have it’s own army of drones to deploy in situations like this?

ATC Medical will provide insightful articles here to better understand our products or how to use them more effectively.